The primary function of an oil-water separator, such as the American Petroleum Institute (API) Separator, is to separate free oil globules larger than 0.015 cm (150 microns) from wastewaters. Such gravity separators will not separate oil droplets smaller than the size of free oil nor will it break down emulsions. Fig.1 shows the classification and size range of oil droplets found in wastewaters.

The importance of oil droplet size is obvious in the above table. This importance is also noted in Stoke’s Law that defines the terminal rise velocity of a given sized oil droplet:

The design of gravity separators is based on the removal of all free oil globules larger than 0.015 cm in diameter and the Reynolds number is less than 0.5 so Stoke’s law applies (NCDENR, 1999). Fig. 2 shows that a drastic reduction of oil (approximately 70 percent) can be achieved within 40 minutes and that no appreciable improvement of oil removal can be seen after two hours of detention time.

Plate oil/water separators include parallel plates and corrugated plates (CPS) offer improved performance by increasing the horizontal surface area of the separator and creating less turbulent flow. Conventional channel units can often be retrofitted with parallel plates to either improve the wastewater effluent or allow for higher flow rates of wastewater. Separators with parallel plate coalescing media can allow flow rates up to three times that of conventional units. Fig. 4  shows coalescing media. 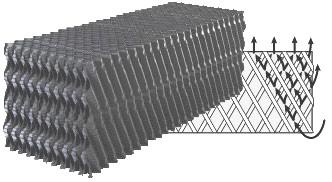 They can also remove free oil droplets with smaller diameters than conventional oil/water separators. Effluent from parallel plate separators is reported to have up to 60% less oil than conventional separators and the oil collected from these units contains less water. Plate separators are designed to separate oil droplets larger than 0.006 cm (60 microns) in diameter. It has been found by experience that a 0.006 cm separation will generally produce a 10 mg/l free oil nonemulsified effluent (Eckenfelder, 1989). This quality can usually be met when the influent oil content is less than 1 percent. One problem with the CPS is that reduced efficiency results from high oil loadings resulting from oil-droplet shear and reentrainment of the oil droplet. This is largely overcome using a cross-flow corrugated plate separator in which the separated oil rises across the direction of flow rather than against the direction of flow (which have plates angled at 45 degree C of heat and spaced at 10 mm). The hydraulic loading varies with temperature and the specific gravity of the oil. Nominal flow rates are specified for a temperature of 20 degree C and a specific gravity of 0.9 for the oil. A hydraulic loading of 0.5 m3 / (h.m2 ) of actual plate area will usually result in separation of 0.006 cm droplets (Eckenfelder, 1989). A 50 percent safety factor is usually employed for design purposes. A parallel plate separator is shown in Fig. 5.

Emulsified oily materials require special treatment to break the emulsions so that the oily materials will be free and can be separated by gravity, coagulation, or air flotation. Emulsions can be broken by using quick-breaking detergents, acidification, addition of alum or iron salts and emulsion-breaking polymers.