The wastewater from industries varies so greatly in both flow and pollutional strength. So, it is impossible to assign fixed values to their constituents. In general, industrial wastewaters may contain suspended, colloidal and dissolved (mineral and organic) solids. In addition, they may be either excessively acid or alkaline and may contain high or low concentrations of colored matter. These wastes may contain inert, organic or toxic materials and possibly pathogenic bacteria. These wastes may be discharged into the sewer system provided they have no adverse effect on treatment efficiency or undesirable effects on the sewer system. It may be necessary to pretreat the wastes prior to release to the municipal system or it is necessary to a fully treatment when the wastes will be discharged directly to surface or ground waters.

The physical and chemical characterization presented below is valid for most wastewaters, both municipal and industrial.

The principal physical characteristics of wastewater include solids content, colour, odour and temperature.

The total solids in a wastewater consist of the insoluble or suspended solids and the soluble compounds dissolved in water. The suspended solids content is found by drying and weighing the residue removed by the filtering of the sample. When this residue is ignited the volatile solids are burned off. Volatile solids are presumed to be organic matter, although some organic matter will not burn and some inorganic salts break down at high temperatures. The organic matter consists mainly of proteins, carbohydrates and fats. Between 40 and 65 % of the solids in an average wastewater are suspended. Settleable solids, expressed as millilitres per litre, are those that can be removed by sedimentation. Usually about 60 % of the suspended solids in a municipal wastewater are Settleable (Ron & George, 1998). Solids may be classified in another way as well: those that are volatilized at a high temperature (600 °C) and those that are not. The former are known as volatile solids, the latter as fixed solids. Usually, volatile solids are organic.

Colour is a qualitative characteristic that can be used to assess the general condition of wastewater. Wastewater that is light brown in colour is less than 6 h old, while a light-to-medium grey colour is characteristic of wastewaters that have undergone some degree of decomposition or that have been in the collection system for some time. Lastly, if the colour is dark grey or black, the wastewater is typically septic, having undergone extensive bacterial decomposition under anaerobic conditions. The blackening of wastewater is often due to the formation of various sulphides, particularly, ferrous sulphide. This results when hydrogen sulphide produced under anaerobic conditions combines with divalent metal, such as iron, which may be present. Colour is measured by comparison with standards.

The determination of odour has become increasingly important, as the general public has become more concerned with the proper operation of wastewater treatment facilities. The odour of fresh wastewater is usually not offensive, but a variety of odorous compounds are released when wastewater is decomposed biologically under anaerobic conditions. The different unpleasant odours produced by certain industrial wastewater are presented in Table 1.

The principal chemical tests include free ammonia, organic nitrogen, nitrites, nitrates, organic phosphorus and inorganic phosphorus. Nitrogen and phosphorus are important because these two nutrients are responsible for the growth of aquatic plants. Other tests, such as chloride, sulphate, pH and alkalinity, are performed to assess the suitability of reusing treated wastewater and in controlling the various treatment processes (Rein, 2005).
Trace elements, which include some heavy metals, are not determined routinely, but trace elements may be a factor in the biological treatment of wastewater. All living organisms require varying amounts of some trace elements, such as iron, copper, zinc and cobalt, for proper growth. Heavy metals can also produce toxic effects; therefore, determination of the amounts of heavy metals is especially important where the further use of treated effluent or sludge is to be evaluated. Many of metals are also classified as priority pollutants such as arsenic, cadmium, chromium, mercury, etc.
Measurements of gases, such as hydrogen sulphide, oxygen, methane and carbon dioxide, are made to help the system to operate. The presence of hydrogen sulphide needs to be determined not only because it is an odorous and very toxic gas but also because it can affect the maintenance of long sewers on flat slopes, since it can cause corrosion. Measurements of dissolved oxygen are made in order to monitor and control aerobic biological treatment processes. Methane and carbon dioxide measurements are used in connection with the operation of anaerobic digesters.

Over the years, a number of different tests have been developed to determine the organic content of wastewaters. In general, the tests may be divided into those used to measure gross concentrations of organic matter greater than about 1 mg/l and those used to measure trace concentrations in the range of to mg/l. Laboratory methods commonly used today to measure gross amounts of organic matter (greater than 1 mg/l) in wastewater include (1) biochemical oxygen demand (BOD), (2) chemical oxygen demand (COD) and (3) total organic carbon (TOC). Trace organics in the range of to mg/l are determined using instrumental methods including gas mass spectroscopy and chromatography. Specific organic compounds are determined to assess the presence of priority pollutants (Metcalf & Eddy, 1991). The BOD, COD and TOC tests are gross measures of organic content and as such do not reflect the response of the wastewater to various types of biological treatment technologies. It is therefore desirable to divide the wastewater into several categories, as shown in Figure 1. 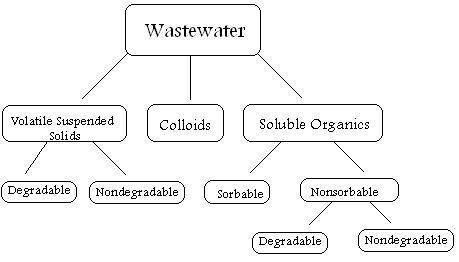