It is important to note and remember that the sedimentation tank is an integral part of the activated – sludge process. The design of the reactor cannot be considered independently of the design of the associated settling facilities.
To meet discharge requirements for suspended solids and BOD associated with the volatile suspended solids in the effluent and to maintain solid retention time independent of hydraulic retention time, it must be possible to separate the mixed-liquor solids and to return a portion to the reactor.
Because of the variable process microbiology that is possible, it has been found that the settling characteristics of the biological solids in the mixed liquor will differ with each plant, depending on the characteristics of the wastewater and the many variables associated with process design and operation. For this reason, when settling facilities are designed for an existing or a proposed new treatment facility, column – settling tests should be performed, and the design should be based on the results of these tests. If it is not possible to perform settling tests, the design should be based on an approach in which both hydraulic and the solids loadings are considered.
Bulking Sludge Definition
Bulking is the term applied to a condition in which an overabundance of filamentous organisms is present in the mixed liquor in the activated – sludge process. The presence of filamentous organisms causes the biological flocs in the reactor to be bulky and loosely packed. The bulky flocs do not settle well and are often carried over in great quantities in the effluent from the sedimentation tank. The filamentous organisms found in the activated – sludge process include a variety of filamentous bacteria, actinomycetes, and fungi. Conditions favoring the growth of filamentous organisms are numerous and vary from plant to plant. 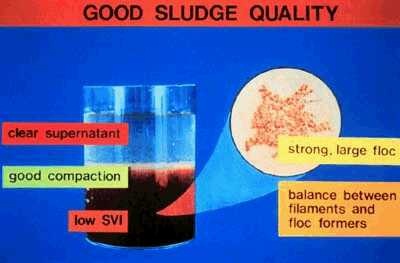 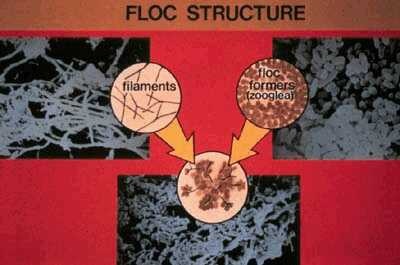 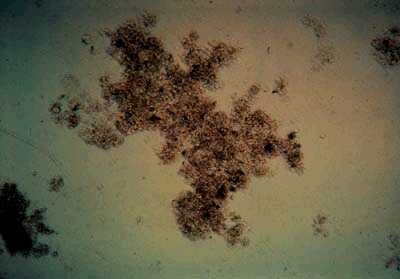 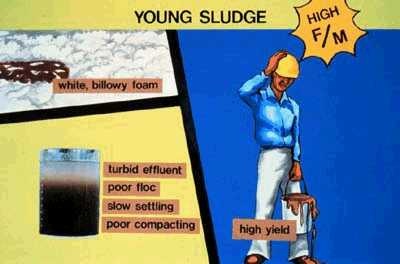 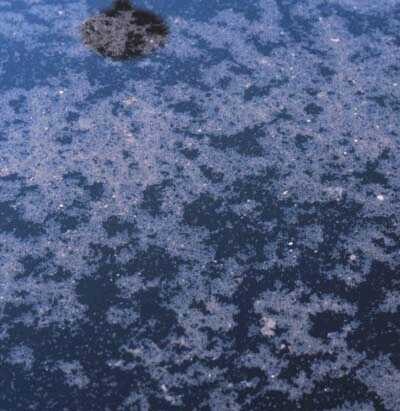 Good Floc Forming
Control of filamentous organisms has been accomplished in a number of ways including the addition of chlorine or hydrogen peroxide to the return waste – activated sludge, alteration of the dissolved oxygen concentration in the aeration tank, alteration of the points of waste addition to the aeration tank to increase the F : M ratio, the addition of major nutrients (N and P), the addition of trace nutrients and growth factors, and more recently the use of selectors. Control of the growth of filamentous organisms in the complete – mix process has been achieved by mixing the return sludge with incoming wastewater in a small anoxic contact tank known as a selector. 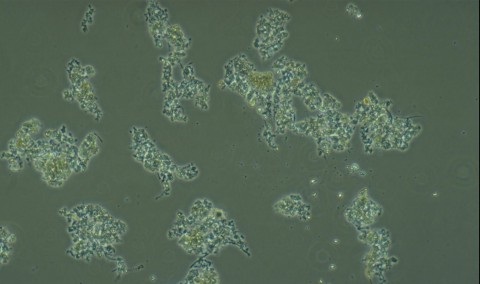 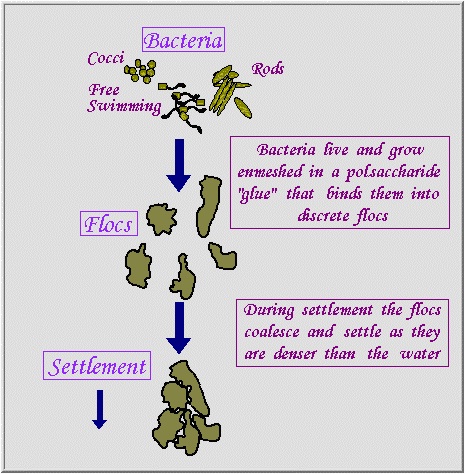 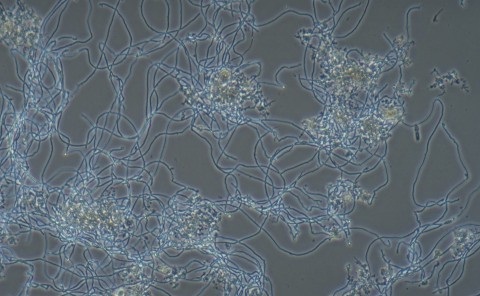 Bad Floc Forming
From practical experience, it has been found that the mixed liquor from plug – flow activated – sludge processes settles better than that from complete-mix processes and tends to have fewer filaments. Improved settling has also been observed in the sequencing batch reactor. Experimentally, it has been found that the relative abundance of filamentous and nonfilamentous organisms is related to their relative growth rates when exposed to varying concentrations of substrate. 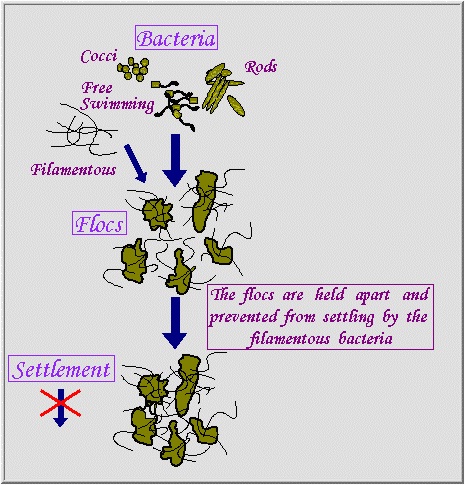 Nonfilamentous floc – formers have a high maximum specific growth rate but a low affinity for the substrate, whereas the filamentous forms have a low maximum specific growth rate, but a high affinity for the substrate. Thus, the low substrate concentrations found in the complete – mix reactor favor the growth of filamentous microorganisms.
Briefly, the activated sludge process involves aerating wastewater in the presence of a predominantly bacterial biomass so that the biomass absorbs and breaks down the organic pollutants in the wastewater. It is fundamental to the activated sludge process that the biomass is settled out from the mixed liquor so that the treated water can be discharged and the biomass returned to the process. The normal biomass flocculates and settles easily. Filamentous bulking occurs when the biomass is colonised by filamentous bacteria, the long filaments hold the flocs apart and hinder settlement. In severe cases very little settlement occurs and solids are lost from the plant in the final water. 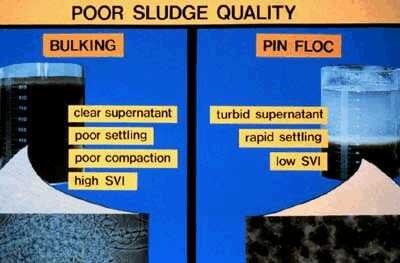 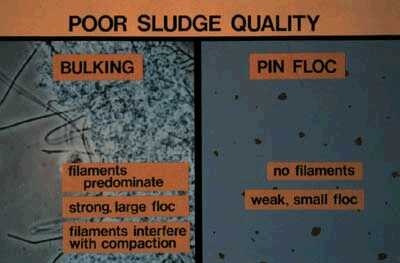 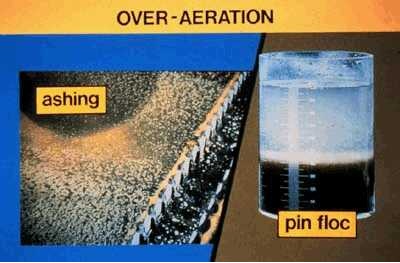 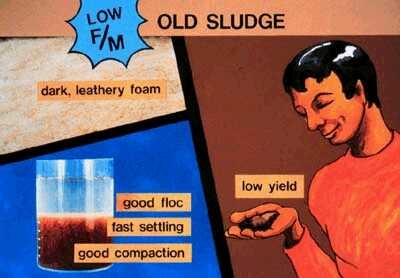 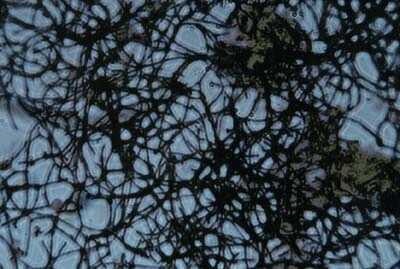 Filamentous bulking is a complex microbiological problem. An enormous amount of research effort has gone into trying to understand and eliminate bulking. Considerable advances have been made and the frequency of occurrence is slowly reducing but it is still a common and potentially devastating problem. The difficulty for the effluent plant operator is that without some microbiological expertise it is difficult to understand what is going on and what to do about it. 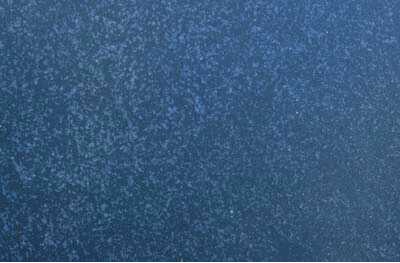 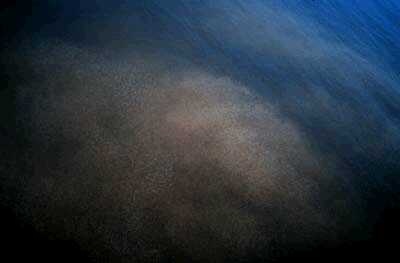 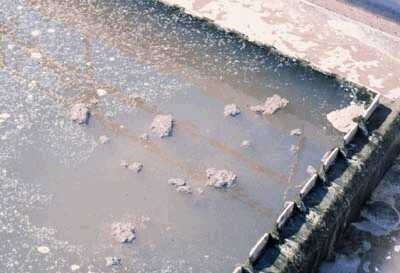 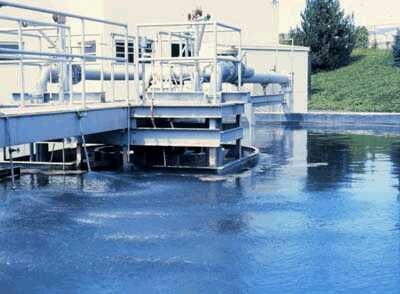 Bulking Causes
Bulking, as you will recall, is a condition where the activated-sludge mass begins to grow in volume without a corresponding increase in weight. Although the causes for “bulking” sludge are numerous, the symptoms always relate to either filamentous microorganism growth or biological slime production that will not allow the mixed-liquor solids to compact and settle.
For years Sphaerotilus natans, a filamentous bacteria, really received a “bad rap” because it was blamed for all filamentous bulking situations. S. natans, as it turned out, was later identified as only one of about 25 different filamentous microorganisms that can cause sludge bulking. It wasn’t until the 70s that Eikelboom developed a way to identify filamentous microorganisms – a means that could even be depended upon with any degree of certainty. 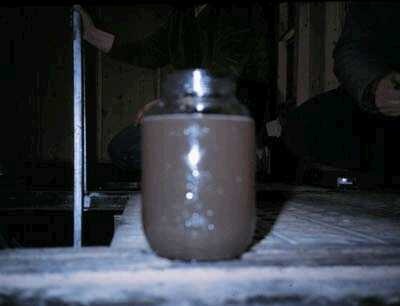 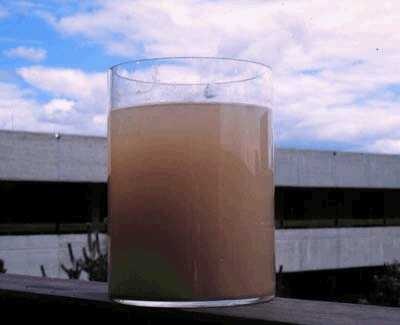 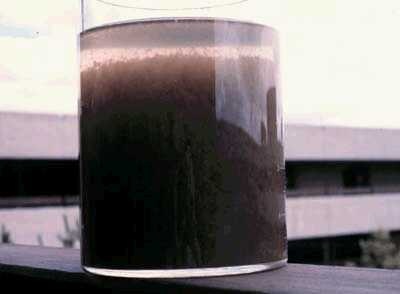 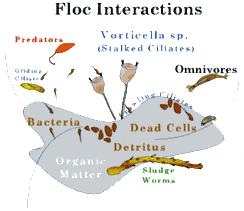 In 1981 two Dutchmen, Eikelboom and van Buijsen, published a biological key which helped simplify the microorganism identification process. This work was further enhanced by Jenkins, Richard and Daigger (1993) who modified Eikelboom’s key. More importantly, they pooled together all known information on why certain filaments would grow under some conditions and some under other conditions. Only then was it possible to determine the cause for a particular bulking condition by identifying the filament involved.
Operators, upon observing sludge bulking, could now identify the causative filament and link the culprit with their understanding of the conditions under which that filament grows. This would then allow operators to act accordingly to modify the growth environment and stop, or at least control, the filament’s growth and alleviate the bulking situation.
Jenkins, Richard and Daigger also studied bulking caused by slime production. Slime was found with nutrient imbalances where microorganisms could not obtain enough nitrogen for protein production or phosphorus for cellular energy regulation. Today, a modified Hattfield process, where ammonia or phosphoric acid are added to the aeration tank, usually controls slime bulking.
According to Jenkins, et al. (1993), filamentous bulking is affected by many things including ; (1) dissolved oxygen (DO) concentration, (2) nitrogen and phosphorus concentration, (3) pH, (4) sulfide concentration, and (5) type of organic materials serving as BOD (i.e., readily metabolized food and slowly metabolized food).
DO concentration : Four filamentous bacteria proliferate with low DO. The first three occur at low to moderate mean cell residence time (MCRT): type 1701, S. natans and Haliscomenobacter hydrossis. The fourth, Microthrix parvicella, is seen at high MCRT. All of these microorganisms usually respond well to increases in dissolved oxygen.
Nutrient deficiency : Type 021N, Thiothrix spp., type 0041 and type 0675 grow with nitrogen and / or phosphorus deficiencies. Biological slime often accumulates as well with the growth of these microorganisms. Adding ammonia or phosphoric acid to the aeration tank is usually required to control these microorganisms.
Low pH : Fungi can proliferate under low pH conditions. The condition is most often found when the influent pH is low. However, it may also be observed in nitrifying systems or oxygen-activated sludge systems where the natural alkalinity of the wastewater is low. Elimination of the low influent pH or addition of alkalinity to the system is required to subdue the fungi.
Sulfide : Thiothrix spp., type 021N, Beggiatoa spp. and type 0914 can all oxidize sulfide to elemental sulfur and incorporate the sulfur into the cell. The sulfur can be seen in the cell when observed under a microscope. The sulfide’s source must be eliminated or the sulfide “tied up” chemically.
Readily metabolized food : Some organisms grow well on easily broken-down, soluble materials. Sugars and short carbon-chain materials are examples. These organisms are S.natans, type 021N, Thiothrix spp., H. hydrossis, Nostocoida limicola and type 1851. Reducing the MCRT and installing a selector often help to control N. limicola and type 1851.
Slowly metabolized food : Types 0041, 0092, and 0675 and M. parvicella are able to grow on slowly broken-down foods and are prevalent in systems that biologically remove nitrogen and phosphorus. Their growth is also augmented by the use of complete mixing in the aeration tank. Control is attained by reducing the MCRT, using plug-flow if possible, and maintaining a uniform DO. Anoxic selectors do not help because some of these microorganisms may be able to denitrify.
More Info About “Nostocoida Limicola”
The term “Nostocoida limicola” describes a group of filamentous bacteria which are found in bulking and foaming wastewater treatment plants all over the world. Identification manuals and texts recognize three morphotypes of “Nostocoida limicola”, i.e. “Nostocoida limicola” I, II and II. All three forms occur as long, bent or coiled filaments staining positive to Gram stain. Under light microscopy these morphotypes differ only in the diameter of their trichomes. The table below, prepared from data taken from the 1988 edition of the Biotechnology Research Centre Filament Identification Manual outlines the details of these organisms and the characteristics used to “identify” them using light microscopy. 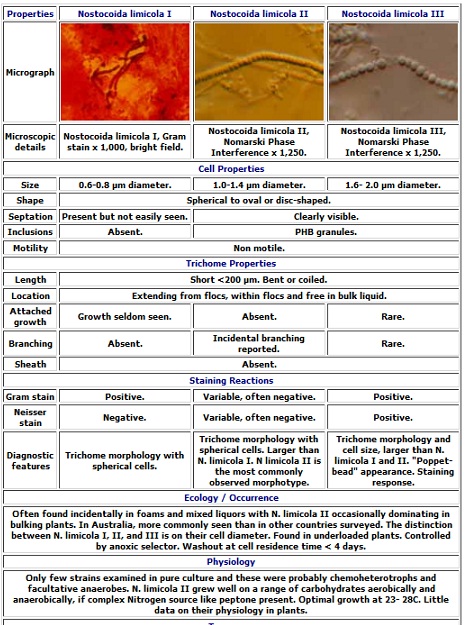 In an attempt to resolve the problems associated with the identification of these organisms the three morphotypes of “Nostocoida limicola” have been isolated from activated sludge following microscopic identification and micromanipulation onto culture medium. 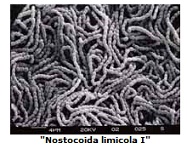 According to the 16S rDNA sequence data which were determined at the University of Queensland by Dr Linda Blackall, the “Nostocoida limicola” morphotypes, I, II and III are phylogenetically different organisms. 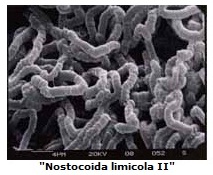 The figures included at the center are electron micrographs of three of our isolates of “Nostocoida limicola” I, II and III, which show the variation in morphology between the organism morphotypes, originally identified by light microscopy prior to isolation. In these micrographs of pure cultures of the organisms, there is a obvious correspondence to the descriptions given in the the table shown earlier which is used for microscopic identification. 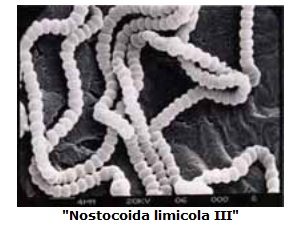 One must consider two additional items. In general, complete mixing in the aeration tank worsens filamentous bulking problems except in highly loaded industrial systems. Therefore, it is prudent to stay away from complete-mix domestic systems, if possible. Secondly, improper filament identification can also exacerbate the situation. Under these circumstances, the wrong control methods will be applied. So, be certain of your filament identification and Good Luck ! at controlling bulking.

The filamentous bacteria have a greater surface area to volume ratio than floc forming bacteria and so are better able to absorb a substance when it is only present at a low concentration. Most cases of filamentous bulking are the result of a shortage of food (low F : M), oxygen, nutrients (nitrogen and phosphorus) or micronutrients (trace elements). There are however more than twenty different species of bacteria that can cause bulking and the surface area theory does not explain all cases. The specific biochemistry of an organism may encourage its growth in a system.
Some filamentous bacteria proliferate in the presence of sulphide, low molecular weight organic acids or slowly biodegradable particulate substrates. Real activated sludge plants do not operate under steady state conditions but usually under constantly changing volumetric and organic loading rates. When the plant is treating industrial effluent these fluctuations are even more pronounced. This instability in the process can disguise the cause of filamentous bulking and may also contribute to the problem.
Source: http://web.deu.edu.tr/atiksu/ana52/ani4091.html