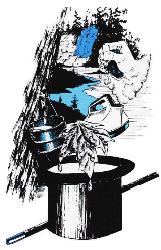 Water is the solvent, the medium and the participant in most of the chemical reactions occurring in our environment.
Water is at once simple and complex. A water molecule itself is simple, made up of three atoms: two hydrogen and one oxygen, H20. The configuration of these building blocks produces a molecule with almost magical properties.

Water – visible and invisible
On earth, water is found as a liquid, as a solid (ice) or as a gas (water vapour).

Canada has about 7% of the world’s renewable freshwater supply, compared with 18% for Brazil, 9% for China, and 8% for the United States.
The ice we skate on in winter is water in its solid form. Unlike most substances, which are densest in their solid state, ice is less dense than water and thus floats. If this were not the case, lakes and rivers would freeze from the bottom up. Fish could not survive, and it is unlikely that rivers and lakes in northern countries would ever completely thaw.
Water vapour forms a kind of global “blanket” which helps to keep the earth warm. Heat radiated from the sun-warmed surface of the earth is absorbed and held by the vapour.

Water’s magical properties
Water molecules are attracted to each other, creating hydrogen bonds. These strong bonds determine almost every physical property of water and many of its chemical properties too.

Boiling and freezing
Pure water at sea level boils at 100°C and freezes at 0°C. At higher elevations (lower atmospheric pressures) water’s boiling temperature decreases. This is why it takes longer to boil an egg at higher altitudes. The temperature does not get high enough to cook the egg properly. If a substance is dissolved in water, then the freezing point is lowered. That is why we spread salt on streets in winter to prevent ice formation.

Thermal properties
Water absorbs or releases more heat than many substances for each degree of temperature increase or decrease. Because of this, it is widely used for cooling and for transferring heat in thermal and chemical processes.

Differences in temperature between lakes and rivers and the surrounding air may have a variety of effects. For example, local fog or mist is likely to occur if a lake cools the surrounding air enough to cause saturation; consequently small water droplets are suspended in the air

Large bodies of water, such as the oceans or the Great Lakes, have a profound influence on climate. They are the world’s great heat reservoirs and heat exchangers and the source of much of the moisture that falls as rain and snow over adjacent land masses.

When water is colder than the air, precipitation is curbed, winds are reduced, and fog banks are formed.

Surface tension
Surface tension is a measure of the strength of the water’s surface film. The attraction between the water molecules creates a strong film, which among other common liquids is only surpassed by that of mercury.

This surface tension permits water to hold up substances heavier and denser than itself. A steel needle carefully placed on the surface of a glass of water will float. Some aquatic insects such as the water strider rely on surface tension to walk on water.

Surface tension is essential for the transfer of energy from wind to water to create waves. Waves are necessary for rapid oxygen diffusion in lakes and seas.

Molecules in motion
Water molecules as well as binding to each other, bind to many other substances such as glass, cotton, plant tissues, and soils. This is called adhesion. For example, in a thin glass tube, when the molecules at the edge reach for and adhere to the molecules of glass just above them, they at the same time tow other water molecules along with them. The water surface, in turn, pulls the entire body of water to a new level until the downward force of gravity is too great to be overcome. This process is called capillary action.

Thus water readily wets many materials. Capillary action allows a paper towel or a sponge to be used to soak up spilled water. Without this property, the nutrients needed by plants and trees would remain in the soil.

The universal solvent
An extraordinary property of water is its ability to dissolve other substances. There is hardly a substance known which has not been identified in solution in the earth’s waters. Were it not for the solvent property of water, life could not exist because water transfers nutrients vital to life in animals and plants.

A drop of rain water falling through the air dissolves atmospheric gases. When rain reaches the earth, it affects the quality of the land, lakes and rivers.

Raindrops are not tear-shaped. Scientists, using high-speed cameras, have discovered that raindrops resemble the shape of a small hamburger bun.
The average human body is composed of about 55% water.
Life on earth probably originated in water.
More than half of the world’s animal and plant species live in the water.
Almost 70% of the earth is covered in water.
The human body needs 2 litres of water a day in our climate; we can last only a few days without water.
Most of our food is water: tomatoes (95%), spinach (91%), milk (90%), apples (85%), potatoes (80%), beef (61%), hot dogs (56%).

The sun-powered cycle
The endless circulation of water from the atmosphere to the earth and its return to the atmosphere through condensation, precipitation, evaporation and transpiration is called the hydrologic cycle. 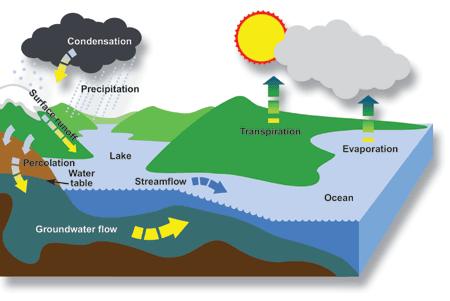 Heating of the ocean water by the sun is the key process that keeps the hydrologic cycle in motion. Water evaporates, then falls as precipitation in the form of rain, hail, snow, sleet, drizzle or fog. On its way to earth some precipitation may evaporate or, when it falls over land, be intercepted by vegetation before reaching the ground. The cycle continues in three different ways:

Evaporation/transpiration – On average, as much as 40% of precipitation in Canada is evaporated or transpired.
Percolation into the ground – Water moves downward through cracks and pores in soil and rocks to the water table. Water can move back up by capillary action or it can move vertically or horizontally under the earth’s surface until it re-enters a surface water system.
Surface runoff – Water runs overland into nearby streams and lakes; the steeper the land and the less porous the soil, the greater the runoff. Overland flow is particularly visible in urban areas. Rivers join each other and eventually form one major river that carries all of the subbasins’ runoff into the ocean.
Although the hydrologic cycle balances what goes up with what comes down, one phase of the cycle is “frozen” in the colder regions during the winter season. During the Canadian winter, for example, most of the precipitation is simply stored as snow or ice on the ground. Later, during the spring melt, huge quantities of water are released quickly, which results in heavy spring runoff and flooding.

Freshwater Series A-1
Note: A resource guide, entitled Let’s Not Take Water For Granted, is available to help classroom teachers of grades 5-7 use the information from the Water Fact Sheets.